The medical community, the food industry and their clever marketing constantly drive us home: The diet should be rich in dairy products to prevent osteoporosis and improve health, as milk contains skeleton nutrients key, including calcium, phosphorus, and the vitamin D.
Fortunately, a small number of doctors begin to think that these recommendations are received wisdom.
The recent Swedish observational study shakes a little more theses recommendations. The prestigious magazine “The British Medical Journal” recently published the observational study by Uppsala University researchers.
It included more than 150,000 people followed for almost 20 years. They were asked about their consumption of food, including milk, yogurt and cheese.
They found no reduction in fractures risk related to increased milk consumption.
In contrast, women who drank at least three glasses of milk per day had a doubled risk of fracture (femoral neck especially) and a tripled mortality rate. Each extra glass of milk increases mortality by 15% for women and 3% for men.
In addition, milk consumption was associated with biomarkers of oxidant stress (urinary concentration of 8-iso PGF1α) and chronic inflammation (interleukin 6 levels).
The authors criminalize carefully the D-galactose, which would cause oxidative stress and inflammation. Of course, they put on guard against too rapid interpretation of these results.

Obviously, I’m not neutral and objective. Since the age of 15, I decided to stop my intake of dairy products (and then decline, because stopping is too hard). I’m the first physician (the only one?)having my thesis in 1994 on this subject: “Interest of a diet rich in vegetables excluding wheat and dairy products in rheumatoid arthritis” with my late teacher, Dr. Jean Seignalet, perhaps the first physician to have been interested in the subject. Again, I thank the few professors who have agreed to be part of my jury.
Young, I was treated as a crank; later, when I was a doctor, as a quack. As my resistance to criticism was limited and my arguments not understood I quickly stopped talking about this. I am ashamed of my lack of courage. Then others have taken over, often with bad arguments and excess.
I invite you to read J. Seignalet’s book “L’alimentation ou la 3ème médecine” (“Nutrition or the 3rd medecine”), published in 1996 and also the works of his friend, Professor Henri Joyeux (or watch his funny and motivational lectures on the net).

I just found a text that I wrote to my 5 year old daughter, when I was in a mission to the Maroni in French Guiana.
Excerpt:
Bright Elise, today I’ll tell you how I discovered that “milk is a sacred cow barn!”.
I was 11 and when pimples acne appeared on my face and shoulder. You know these kinds of whiteheads, blackheads and pus-filled pimples that left my ugly scars.
This is not the flowery aspect that bothered me the most. It was not the affectionate nicknames such as “hey, the mathematicians, you cheat with your front calculator” or the nice phrases like ” Cleans you, you have worms in the skin” No! What I hate is when “they” extracted me buttons. When I say “we,” of course, it’s grandma. It started early. First, smothered with smelly ointments, so slimy that I darn’t move a nostril. That, again, I accepted. Torture is when grandma begged me: “I can’t leave you like that. You must remove these buttons. Though painful screaming, or arguing that it will leave me horrible scars for life. Nothing was stopping her. The sardonic grin, the tip of the tongue caught between his teeth, she only stopped when the handkerchief was covered with pus and blood. There, finally subsided, she could return to his duties.
Later, the girlfriends have taken the baton. Quite, “the” girlfriends, that’s saying a lot, because there was none as I had these buboes. But more confusing was when hiding in the mirror, after casting a furtive glance right and left, I pressed myself on a ripe button. It was one of those delightful little moments that belonged to me. In general, it was at that moment that my mother arose: “Stop! You do it like a pig, I’ll show you”.


In short, I was desperate to get rid of those damn buttons. Healer, hypnotists, naturopaths, grandmother remedies and other magic potions, nothing worked. I board then begin feeding experiments, such as fasting: excellent to lose the weak muscles I had … I once did an apple cure e – remember that I hate fruits and vegetables -. You see how I was motivated. For 10 days, I ate only apples and buttons started to dry. But I stopped one climbing day with Pierre and Alain, because I passed out. It was the first time Alain yelling at me (with the times I forgot to make a knot at the rope end that was too short in a cave well). I promised to stop … eating apples. But I had the intuition that I was on the right track, the food … damn! I’ve got to go. I’ll tell you how I came to my crudity period without milk and gluten, which was a period where all succeeded me. But that’s another story. 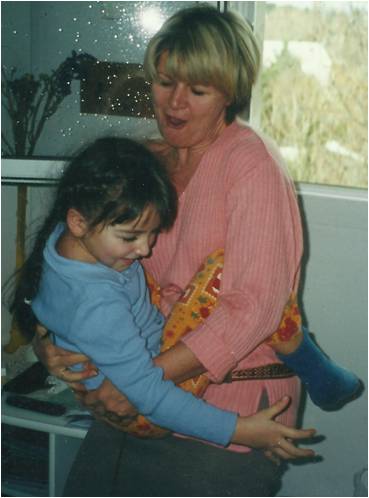 Note: except his pimples phobia, your granny took very good care of us.