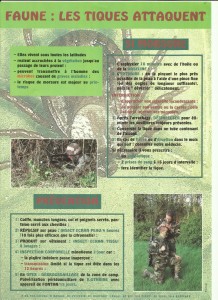 These double-blind placebo-controlled studies were the most important on the subject (+ 600 soldiers).
– Is that repellents used against mosquitoes are effective against ticks;
– In case of bite, you have 24 hours to remove the tick before the first blood meal where it will transmit its microbe;
– That the best way to remove it is simply catching carefully the tick as close to the skin between his nails, and pull gently. All other methods (unscrewing, asphyxiation oil bodies, ether anesthesia, heating …) the stress causing the injection of its potential microbes.
To keep awake exhausted soldiers of the dangers of such a small creature, I had to be short and rude, like:
“I have just seen in consultation a holy fighter, clenched jaws, long muzzle, dark and piercing eyes, like,” I’m not a chick, I’m not there to laugh. “Physically he looked like Vin Diesel and intellectually to the ancestor of Stallone. You’ve already met, but to preserve its identity I will reveal his first name: John R. I was usual he walks with sea urchins under the arms. . More weird is that he seemed to have also between the thighs … sea urchins. With his stentorian voice: “Captain, I have a little problem” and here he drops his briefs. After the shock effect when I thought he had grafted a mammoth penis, I realized it was just bloated. As the smell was unpleasant, I had a nose clip to root a tick sated and smiling into his welcoming mucous, etc… “. 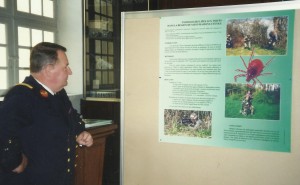